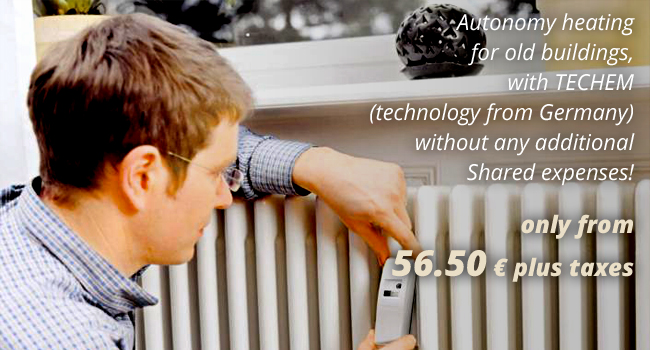 As operating costs for heating is a considerable part of family budget, it is reasonable that the final consumer has a claim for both adequate heating (in duration and quantity) and economic operation. Therefore, the problem that must be addressed in the operation of central heating is the autonomy in its use, so that the consumer has heating the hours he needs it and it is not recklessly used when he is absent. The next question that arises is the equitable distribution of heating costs, so that consumers can trust its proper operation and use it without hesitation. Let us examine the situation today in Greece.

The allocation of heating costs in buildings with more than one property and central heating as it is implemented in our country presents many peculiarities and is often the subject of disputes between tenants. It is true that in Greek buildings, with only a few exceptions, heat consumption is not measured at each property, so that the heating cost is associated with the actual consumption. Even in modern constructions of autonomous heating with use of time-meters heat consumption is only approximately estimated, as what is measured is the time of heating usage of every apartment and not the actual amount of heat given to it. Thus, the system autonomy creates a sense of fair distribution of heating costs but has several primary weaknesses, as it requires precise adjustment of benefits, while it doesn’t calculate the reduced heat output to properties when there is partial use of radiators (e.g. closed radiators in unused rooms).

Moreover, while autonomous heating systems are encountered in the implementation of technical regulations for allocating heating costs as systems with temperature meters for which the size of the radiators doesn’t have to be taken into consideration, in fact the replacement of the radiators is not possible, because it would require a new heating costs allocation study as the potential of the property to receive heat from the central system changes.

The situation is even worse in “traditional” heating systems (dual pipe without autonomy). In this case not just the issue of just or unjust distribution of heating costs arises, but even the issue of acceptable use of the system according to the real needs of consumers, since this is not available to them when they really need it, while the participation of each property to expenditure is independent of their usage or not of the system.

Besides other things, the allocation of heating costs as is done in Greece is a key disincentive to saving energy in homes since it does not connect the actual heat consumption of each property with heating costs. If, for example, heating costs can be connected to actual consumption, the consumer can use the radiators for the time and at the rooms he chooses.

This is also the philosophy of EU Directive 93/76/EWG, known as the SAVE action to reduce fuel consumption and exhaust emissions through the rational use of energy which recommends that Member States continue to develop conditions that tie the cost of heating and air conditioning with the actual consumption.